3rd October 2012 – Today I was going to have an above knee amputation surgery. Hopefully this would remove all the traces of cancer from my limb which would give me a better chance of surviving although the surgeons were a bit concerned about me having Lymphedema and how it would react after surgery and during the healing process also there was concern about my leg getting infected as anyone living with Lymphedema knows how easily Lymph limps are prone to infection.

I was taken down at 2.00pm for the operation and I had something placed into the small of my back called a “block” it is very similar to a epidural to numb you from the waist down so you don’t feel any pain. I was also asked if I would like to stay awake through the procedure, I declined!!! Although I love to watch operations on TV and the Internet, I didn’t want to watch it live on myself.

Was I scared/worried about the operation………….. No! I was more concerned about after the operation being bed bound and having to use a bed pan. In the past I have worked in nursing homes and I didn’t mind doing helping other people, but there is no way I could have it done for me, I needed to go by myself! I already warned all the nurses about my phobia of not being able to go to the bathroom myself and so they arranged it for the physio team to come see me.

I was back on the ward at about 6.00pm with something called bomb attached to my little leg. (I don’t like the word Stump, so from now on I will refer to it as my little leg!) Which was supposed to stop the pain, but it didn’t for the first day or so but they made sure I was well medded up………. thankfully!!!

4th October 2012 – This morning (Early) The physio team came and gave me help and advice on the safest way to get out of bed and move around the ward. They brought me a wheelchair to see if I could get in and out of bed safely, which I did then they took the wheel chair away as I had to have one measured for me which hopefully would be with me in a couple of days. In the meantime I commandeered the ward wheel chair so I could get around although it was much to the disapproval of the physio team when they found out I was using it but when a girl has got to go, she has to go!

Even though I was well drugged up and I had the “Bomb” attached to my little leg I started to have the symptoms of “Phantom Leg” where although you know your leg is no longer there, you can feel it and your toes wiggling!

7th October 2012 – Here are a few photos of my leg after they have taken the bomb out. As you can see my scares from my above knee amputation surgery are very neat. My leg was very swollen, quite painful and I was still having shooting pains going up and down the FULL (Phantom) leg! 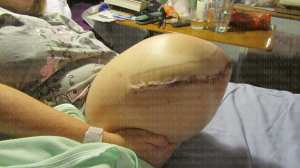